There is a very large mural project, for which I’ve had the pleasure of acting as artistic director, which will be installed in Downtown Canandaigua (on Coach Street) very soon! Even though when it arrives on site it will appear to have developed rather quickly, the mural itself has been several months in the making. 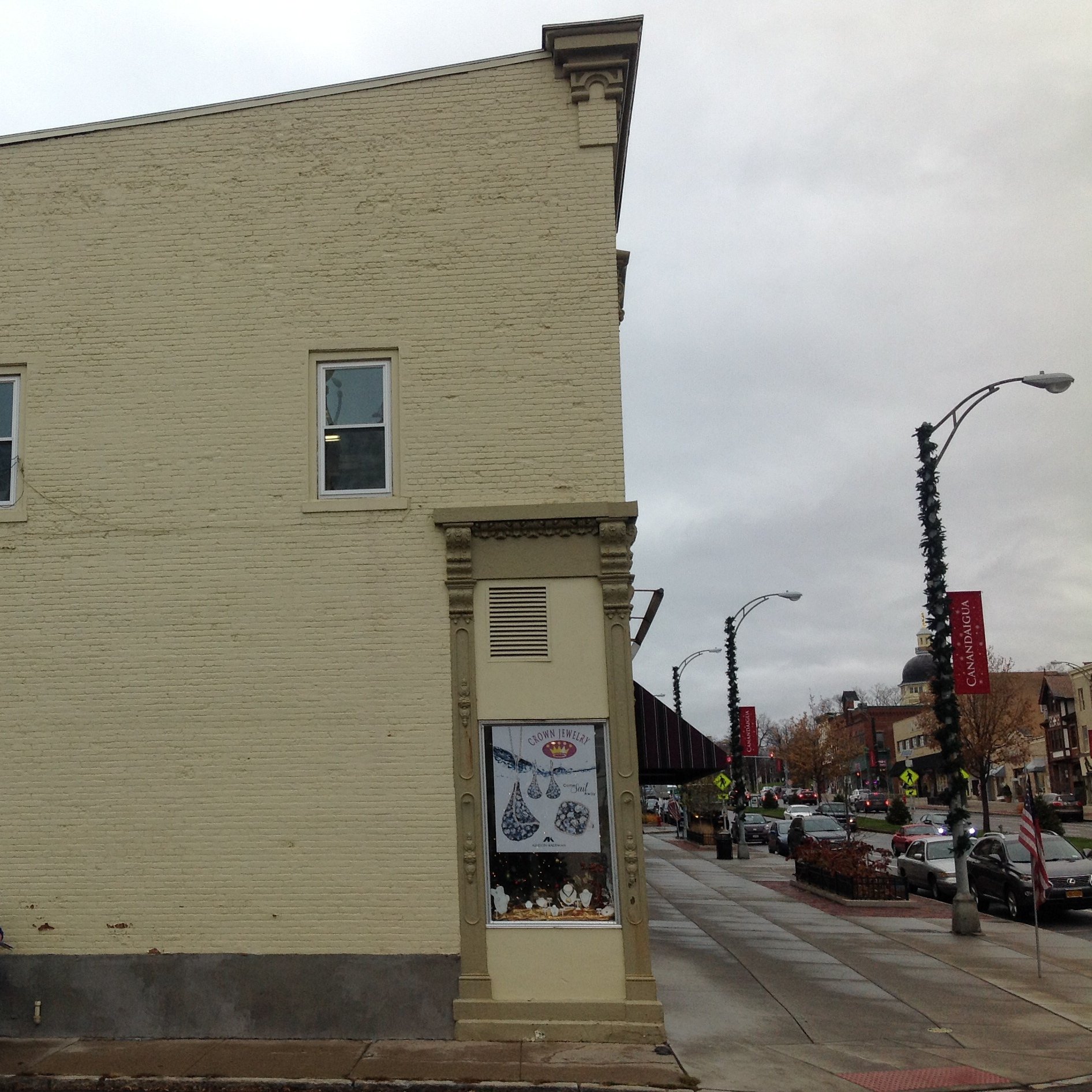 The process began with several meetings with the City of Canandaigua Endowment Fund Committee, whose goal for this project was to create a mural highlighting Canandaigua’s rich history and iconic imagery. The discussion began with Mayor Ellen Polimeni pulling out Daily Messenger news articles that were published back in 2008, asking the community to submit ideas about what should be included in a downtown mural. Unfortunately, the mural project didn’t come to fruition back then, but Mayor Polimeni (member of the current mural committee, and art enthusiast) felt as though that was a logical place to begin the arduous task of deciding what to include. It has been Mayor Polimeni’s dream to be able to complete a Downtown mural ever since the 2008 project failed to lift-off.

Here are the mural's artists, and I, with Mayor Ellen Polimeni. From the left it's: myself, then Chloe Smith, Melissa Newcomb, Ellen Polimeni, Jane Alden, and Meredith Mallwitz. Photo credit to Debbie Smith.

The approach we settled on was for me to be the artistic director, which includes (but is not limited to) such tasks as creating a detailed budget and timeline, and overseeing an official Call For Artists (juried application process) to secure a quality team to execute the mural painting. I also drafted numerous sketches to present the committee prior to the artist selection. I was to supervise the artists’ work, as well as paint my own section of the mural. My strategy was to produce a full-color, to-scale replica of the whole mural design, with all the desired imagery included. Then, once the artists were selected, I would segment the mural design and give each team member a section to paint (keeping one for myself, of course). 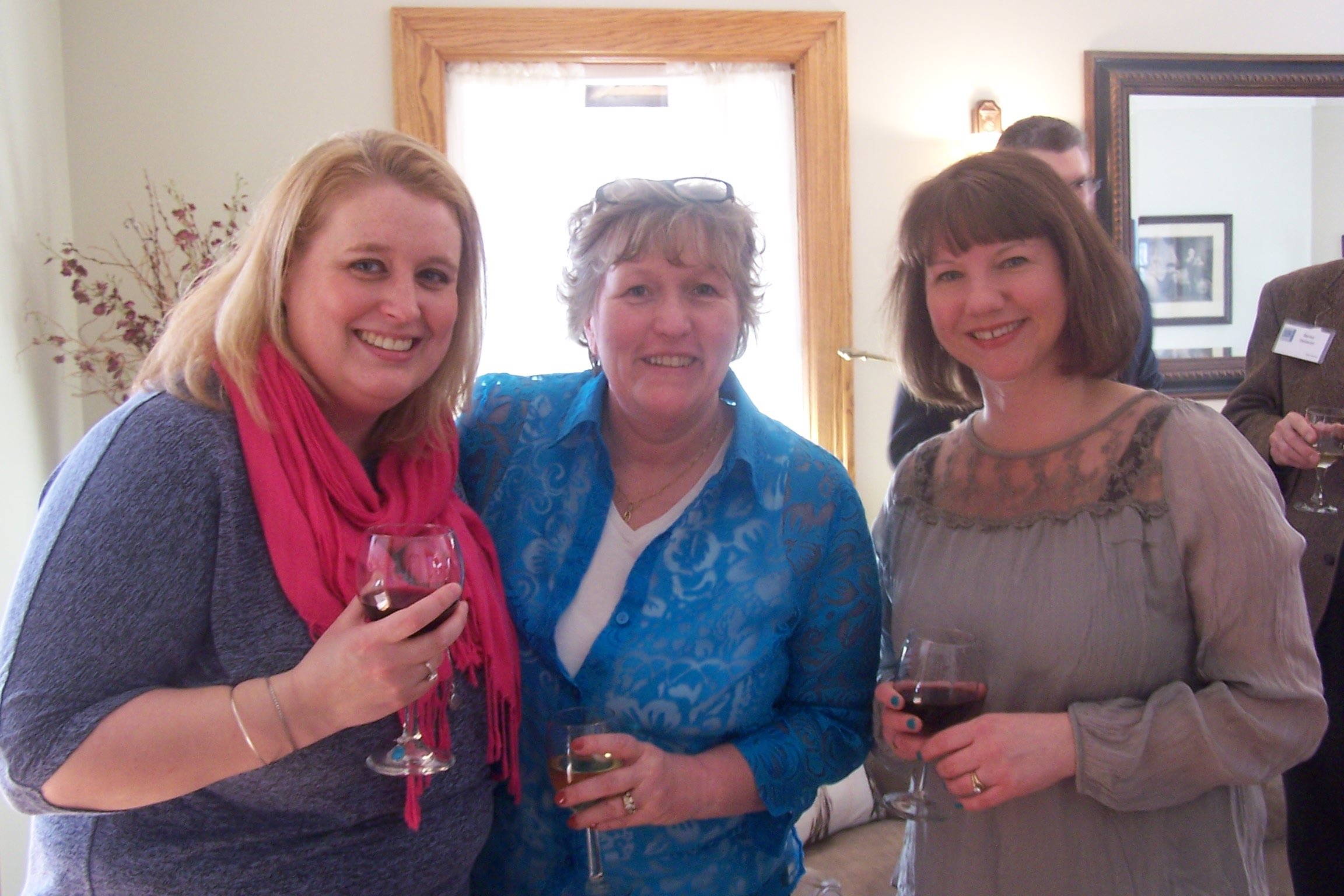 This photo is Melissa Newcomb, artist; Denise Chaapel, Downtown Canandaigua's Business Improvement District Co-Chair; and myself, at a lovely "mural kick-off party" graciously hosted by Meredith Mallwitz and Todd Meyer in their historic Canandaigua home. At the party, the committee members met the project's mural artists for the first time in person. Also present was Ontario County Historian Dr. Preston Pierce, on-hand to answer any historic reference questions that the artists had. He had brought photos and stories to share, which inspired the artists and brought the imagery in the sketch "to life". 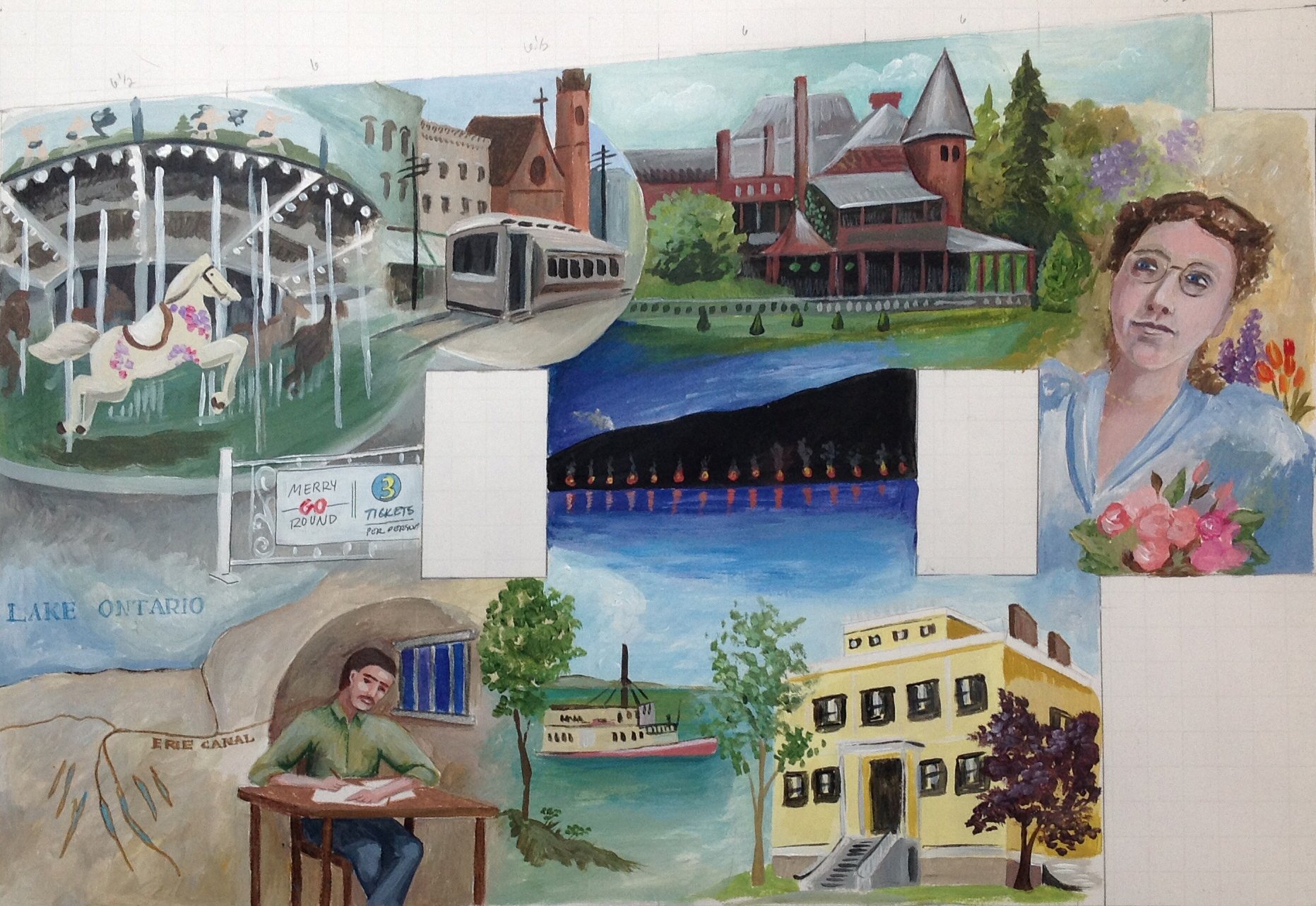 Here is a very rough preliminary sketch of the initial concept. From here, each artist was given a section to complete on their own.

The mural is painted on Evolon, which is an extremely strong, yet surprisingly lightweight, composite fabric which comes on a roll, just over 6’ wide and cut to any length. Part of my work involved ordering, cutting and delivering the Evolon to each artist, as well as all the paint they would need, so that they could each work on it in their studio during the colder months. Once the mural is painted, it will be hung on the exterior wall using a gel medium mixture that acts like paste. The whole thing is varnished with the same glue-like substance, protecting the mural for years to come.

Being that the mural is so large, and being installed on a well-used Downtown side street, it would be impractical, inefficient, and costly to shut down Coach Street in order for the mural to have been painted directly on the surface. The artists would have to paint on site for several months, at treacherous heights, with weather to consider; all very challenging. Using Evolon solved all these issues.

Throughout the process, I insisted that the mural be done in a manner which allowed each artist to have the freedom to express their individual styles. I have never before designed a mural in which other professional artists did the painting. If the tables were turned, and I was asked to paint someone’s design, I would very much wish for the artistic director to respect and trust my own creative process. I want the viewer to notice that FIVE different artists painted this mural, that it was not painted by the same person.

It was obvious by the look on their faces that the committee members did not understand this concept, initially. They were unsure of the outcome of “allowing the artists to do their own thing”. One of the most beautiful parts of this project, for me both personally and professionally, was when they trusted me implicitly! I was very honest and upfront with them; I had never in my career done any other mural project in this manner! But, they had the courage to allow me to convince them (and myself!) that this concept will work. And that it will result in a gorgeous, cohesive mural.

What I loved most was when I began to see how each artist interpreted my preliminary design to reflect their own style and technique. It gave me chills. I am astounded at how creative and talented they each are.

Without a doubt, the most challenging part of the project was that right before the deadline of the Call for Artists, just four days before Christmas, my father passed away suddenly. My dad, Marty Wheeler, was not only an incredibly loving and supportive father to me, but also a best friend and a very active partner in my business. We had been working very closely on this project together, right up until his death. He took care of logistics, tools, equipment, and installation, (among many other things!) so that I could continue to be my most creative. We spent many hours together brainstorming, calculating and figuring the most efficient way of executing this huge mural. Upon his death, there were many days when I felt “How can I possibly continue to do this, the largest, most innovative project of my whole career, without him here?” I am realizing that, although this will always be a process for me, he prepared me well, and that I am capable of anything I set my mind on. He still guides me, and sends me lots of kind people to help. It still is so raw, and sometimes I think I was crazy to keep this project going when I was, and still am, in such a deep state of grief. But, I don’t think he is letting me give up. It's the only way I can attempt to describe how I am managing to put both feet on the floor to continue going each day.

To my knowledge, nothing like this has ever been done in this area; an exterior mural of this scale, done on Evolon, by several artists. In order to conceptualize this, I simply used my experience with other large-scale murals that my dad and I completed on our own, and applied the exact same principles to scale it in size and also to break it up for each artist. I feel like the confidence I had going into this, even after never having done a mural like this before, was a result of having experienced successful mural projects in the past. I found myself at one meeting saying something like, “It’s the same thing that I always do. Just bigger. And with more people. And with new materials.” Oy!!!

I assigned the components of the mural according to what I thought each artist would like. Most of this just came intuitively for me. In forthcoming mural posts, I will let each artist describe how they feel about what piece they were given. My personal opinion is that the pieces they were assigned suited them each exceptionally well!

Throughout the process, the team of artists and I used many forms of communication. I met with each of them initially face-to-face to discuss the project and to go over the supplies they received. After that, we used texts, Pinterest, Dropbox, and email to share photos and updates. In Dropbox, we are able to share the files online and comment on each other’s work. We each uploaded photos of our progress, which was very insightful and interesting to see. I believe it also helped us to be accountable for not falling too far behind. It was good motivation! Everyone encouraged one another, and the artists felt comfortable asking for help from either me, or one another, if they needed it. It was helpful to share our experiences, especially since none of us had ever painted with this material before. My husband, Bill Colburn, built me a very large easel for the Evolon. I uploaded detailed photos of this in our shared Dropbox folder, and Melissa’s dad built exactly the same easel for her, using my photos as a plan! I feel we have a strong, talented, professional team, and that everyone was genuinely interested in the success of each other, and for the team as a whole. 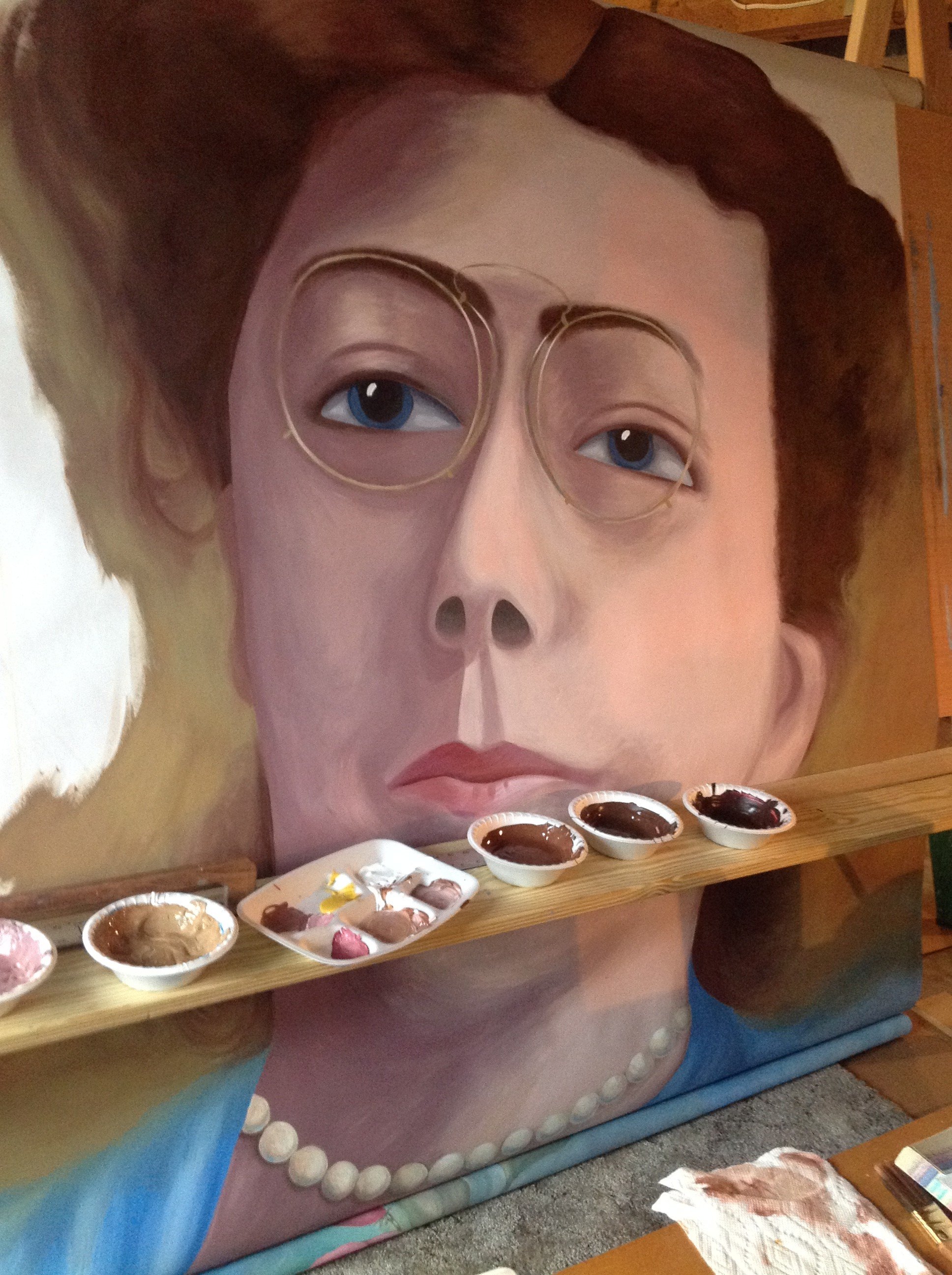 Here is a photo of my portion of the mural, featuring a portrait of Mary Clark Thompson, being painted in my studio space, on the large easel my husband custom-made. 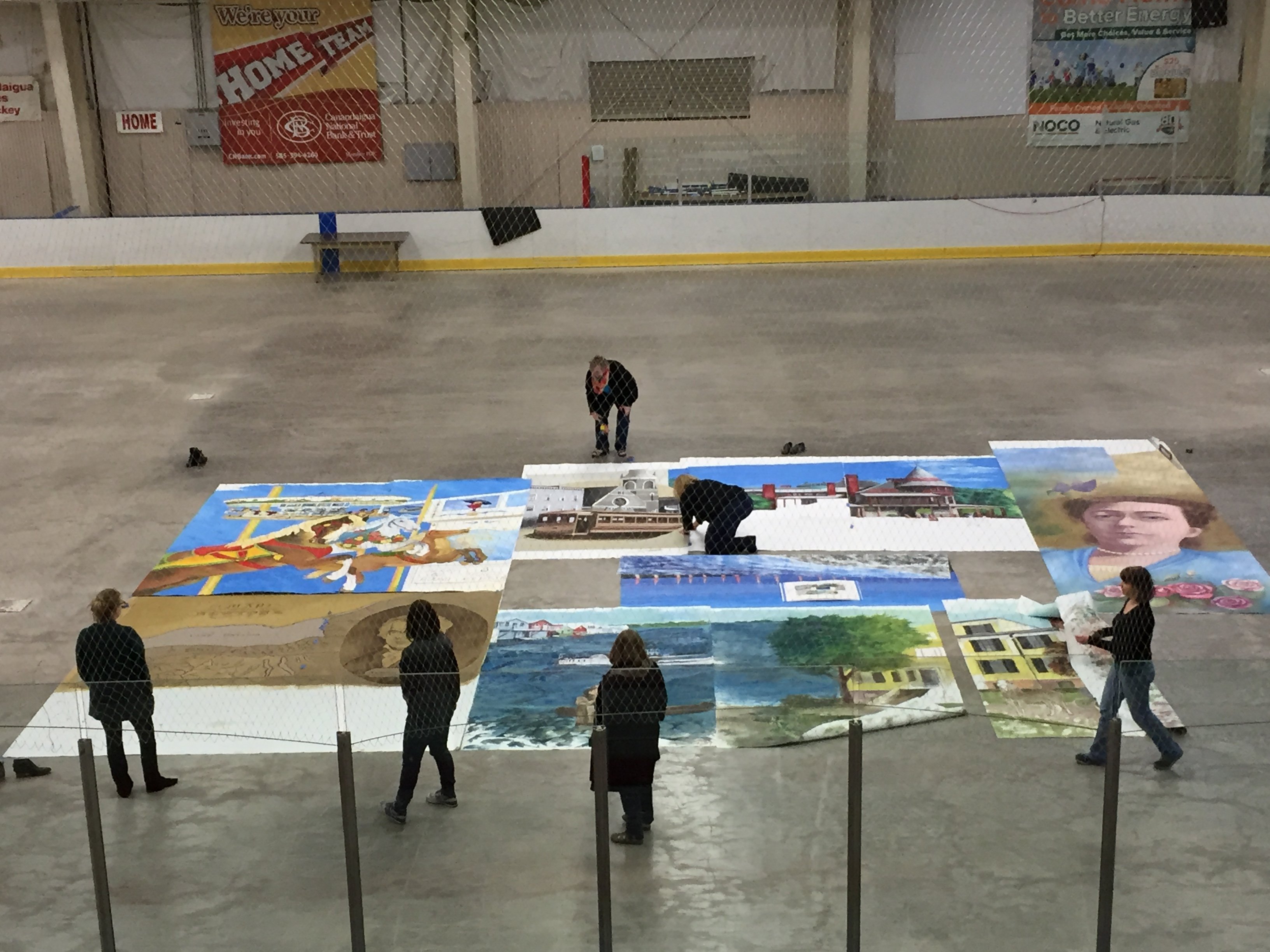 It was only after everyone was about 80% - 90% done that we first got all the pieces together to see how the mural looked as a whole. We brought the pieces to the Greater Canandaigua Civic Center to lay them on the giant “rink” floor. That was unbelievably exciting!! I knew that, as they say, “the whole is greater than the sum of the parts”. However, I was very surprised by how moved I was seeing the mural as a whole for the first time. We invited the committee members to see it, and I was surprised how many of them came. The overall consensus was that everyone thought it was beautiful!! (Whew!!!)

Over the next couple of weeks, I will be publishing articles here on my site about each of the artists, and all the amazing innovations, creativity, and problem-solving they each bring to this project. I am so honored and humbled to be a part of this mural!! May it be an inspiration to the City of Canandaigua residents and visitors for a long, long time to come. I hope you'll continue to read about the journey of this project from each artist's perspective. It is an interesting story, from all angles!!