After many long months of planning, designing, constructing, painting, and installing, I have completed a new mural for the outside of the old fire station in Williamson, NY, located at 4122 East Main Street.  If you haven’t already, now would be a good time to read my previous post about this project here: Firefighter Photo Session (it will open a new window, so you can go ahead and read it and come back!).

Here are some photos of the finished product!

There are many aspects to share regarding this project, just because of the sheer magnitude of it. The mural consists of 8 panels, each 8′ wide X 4′ tall. The final dimensions of the mural are 16′ wide and approximately 15′ tall (the top as you can see is cut in a unique profile, curved to match the painting design; so it’s 15′ to the highest point of the curve).

The space in which I painted these mural panels was is in my Dad’s barn and workshop, in Bloomfield, NY. The workshop is a comfortable, heated space large enough to house the easel that my husband Bill made for me. I painted the mural using Benjamin Moore exterior latex paint. The panels are made from quarter-inch Birch hardwood. There are three-quarter inch furring strips mounted to the back of each panel. I only had one panel on the easel at a time, but near the end of the project, I could lay two panels next to one another on the floor of the barn which is much larger than the workshop area. By laying the panels down next to one another, I could match up my lines so that the mural appears seamless when installed.

Here are some photos of the painting process: 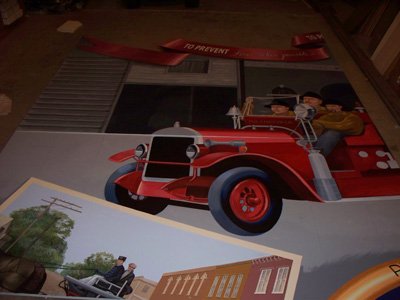 Of course, I could not actually see the mural in its entirety until it was all on the wall! The panels were screwed into the brick facade, after much work was done to level and plum all the guide lines. Lucky for us, the wall is very flat. Then, after all the panels were installed, I was able to do some painting after the mural was up on the wall. I touched up the screw holes, and made sure my lines matched up perfectly. I didn’t have to do much to match it up, it was almost spot-on. I added some details to the firetruck and the background that were much easier to add once the mural was in place.  We also added caulking between the outer edge of the mural and the brick wall, as well as several coats of clear satin Minwax Poly-Crylic sealer to the mural surface to protect it for years to come.

Here are some photos of the installation process!

I also created a Flikr album and slide-show of the installation process, if you would prefer to view the photos full-screen!

You (yes, YOU!) are invited to the Dedication of the mural on May 11, 2013 at 12:00 noon. The Dedication will be held right in front of the mural. There will be a lot of activity following the Dedication, as the Apple Blossom festival kicks off that day as well. For more information about the Apple Blossom Festival and the event schedule, please visit their web site: www.williamsonappleblossom.com. Also, that same day, the Firewall Coffee Hall celebrates its 1-Year Anniversary and they will have some live outdoor music entertainment beginning shortly after the Dedication. Please follow the Firewall Coffee Hall on Facebook!

After the Dedication ceremony (which I will certainly create a blog post about!) there are plans plans by the Williamson Charrette committee to put a “pocket park” / green area under the mural which will include a sitting area and nice landscaping, in order to improve the area and attract visitors to enjoy the space. Also, there is some preliminary talk of lighting the mural. The Williamson Charrette Committee relies on the generosity of the businesses and families in the area to support their projects, which you can see are aimed at improving the quality of life for everyone, and attracting visitors to the area. If you’re interested in learning more about the committee or donating your time, talent or treasure, please let me know, and I’ll put you in touch with them (amy@amycolburn.com).

I am so happy that this mural project turned out the way it did! It was a long process, and so much work. I loved painting it, every step of the way. I was challenged by this mural in it’s scope and the fact that it had to be painted in pieces. I used the grid method to make sure that the mural looked exactly like the preliminary painting. I used a lot of tools, like tape, string, chalk, rulers, and triangles. These tools are absolutely necessary when working at this scale! I couldn’t be happier with the result.

This mural project could not have gone the way it did without help from some amazing people! I would like to sincerely thank my amazing dad, Marty Wheeler for the months of dedicated work he put into designing & constructing panels, and engineering the entire installation process. My cousin Brian Wheeler, a very talented and skilled carpenter, helped tremendously with the installation, and we couldn’t have done it without him. Thanks to the entire Williamson Charrette committee who were so nice to work with! Thanks to George Ehresman, the committee Chair, for all the wonderful photos be took (most of what you see here is credited to George). George also spent a great deal of time on the phone with me, or traveling to meet with me in-between meetings in order to clarify details and keep the project moving along. Much gratitude goes to all involved, and to all who stopped what they were doing while we were installing the mural to let us know how much they appreciated it.