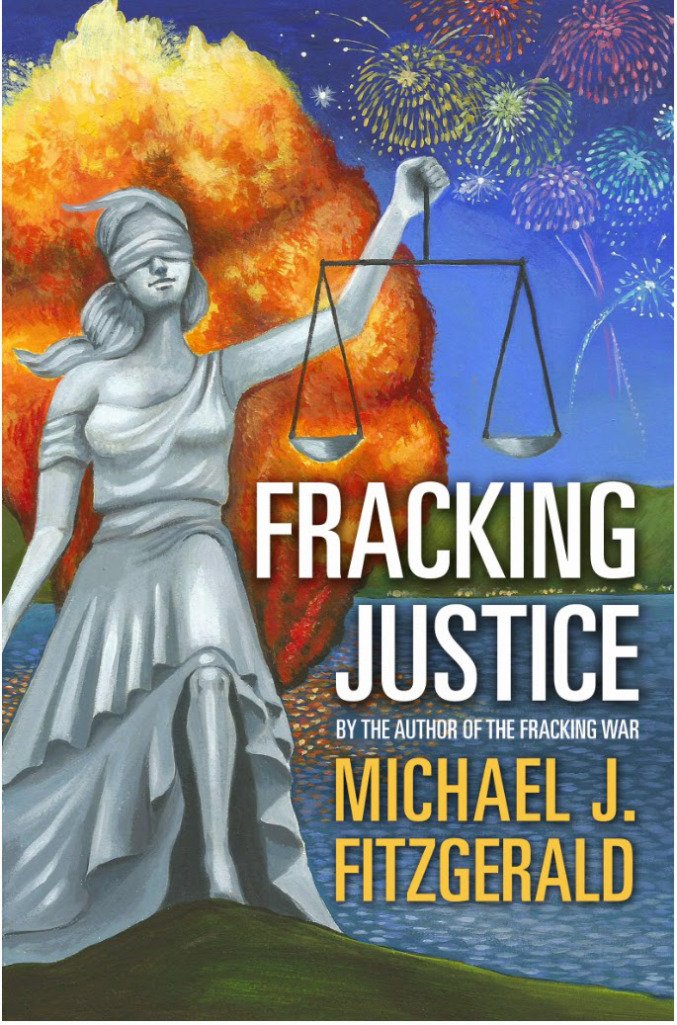 Many times, when I tell people I am an illustrator they say, “Oh…? What books?” Well, funny thing is, I have illustrated a LOT of things in the span of my career (wall murals, advertising, portraits, signage, etc.) but only one book cover! And this book cover was just completed recently, for local (Finger Lakes region) author Michael J. Fitzgerald. Michael contacted me this past winter. Since he had already published a prior novel, “The Fracking War” (available on Amazon, here), and this current novel was to be a sequel, I had the opportunity to read both transcripts prior to initiating a design concept. The series is action-packed and filled with drama and great characters. Not to mention, the setting is inspired by the area in which I live!

After reading the transcript, I immediately had an idea of what the cover art could depict. Within two conference calls, we had arrived at a general concept. I sketched out two versions, based on those brainstorming sessions. Michael’s editor, Sylvia Fox (who is also married to him!), was in on the calls as well. It helped to have three minds working together. Ultimately, it was Sylvia’s suggestion to add the celebratory fireworks into the image.

Michael says, “Why Amy Colburn? Well, I read about her work in the Finger Lakes Times where I publish a column every week. It seemed like someone who could do such a fabulous job on murals and other art could do a cover for an eco-thriller novel. I was right. I’ve worked with artists on many projects, but never had someone read my work and get the idea so quickly. Or produce such excellent art so fast.”
The whole process of designing art for a novel cover is interesting in that the goal of the art is to tease the potential reader, without giving away too much of the story. It needs to summarize, but also leave some room for interpretation. I really enjoyed working with Michael and Sylvia and loved their honest and quick feedback.
“Ultimately, I think the cover Amy designed is going to make people grab Fracking Justice off the shelf to see what it’s all about. She did her part very well. Now my hope is when people get past that gorgeous cover artwork they like my words, too.”
Please visit Michael’s website, AuthorMichaelJFitzgerald.com! I have only designed the cover for Fracking Justice, but I encourage you to purchase both books as you will want to start with The Fracking War to get yourself up to speed. As far as another novel in this series? Michael says, “My next novel will the third in this fracking trilogy and is tentatively titled Fracking Evil. I hope I can convince Amy to do the cover for it, too.” Absolutely! No convincing needed!
And, if you’re in the Hector, NY area on June 2, 2015, from 5pm to 8pm, please attend a launch party at the Hector Wine Company. That party is open to anyone who wants to attend! You will be able to purchase Fracking Justice at this party, and Michael will be signing books, giving a short speech and introducing some special guests who help makeboth novels possible. By signing up for Michael’s newsletter (which can be done from his home page), you will be kept current on his upcoming events, speaking engagements and places where you can purchase Fracking Justice. So, please make sure you sign up so that you can get your copy and be the first to know about the next release!
Contact Us